Rajma Masala is one of the most commonly prepared and popular vegetarian dish from Northern India. It’s a a thick curry preparation of rajma in a tomato and onion based gravy cooked along with basic Indian Spices available in most homes.

As popularly known in India “Rajma” is the Hindi name for “Red Kidney Beans”, There are a number of variety of Rajma available in the market but the best ones are supposed to come from the hilly regions of Northern India (Jammu & Kashmir, Shimla in Himachal Pradesh). 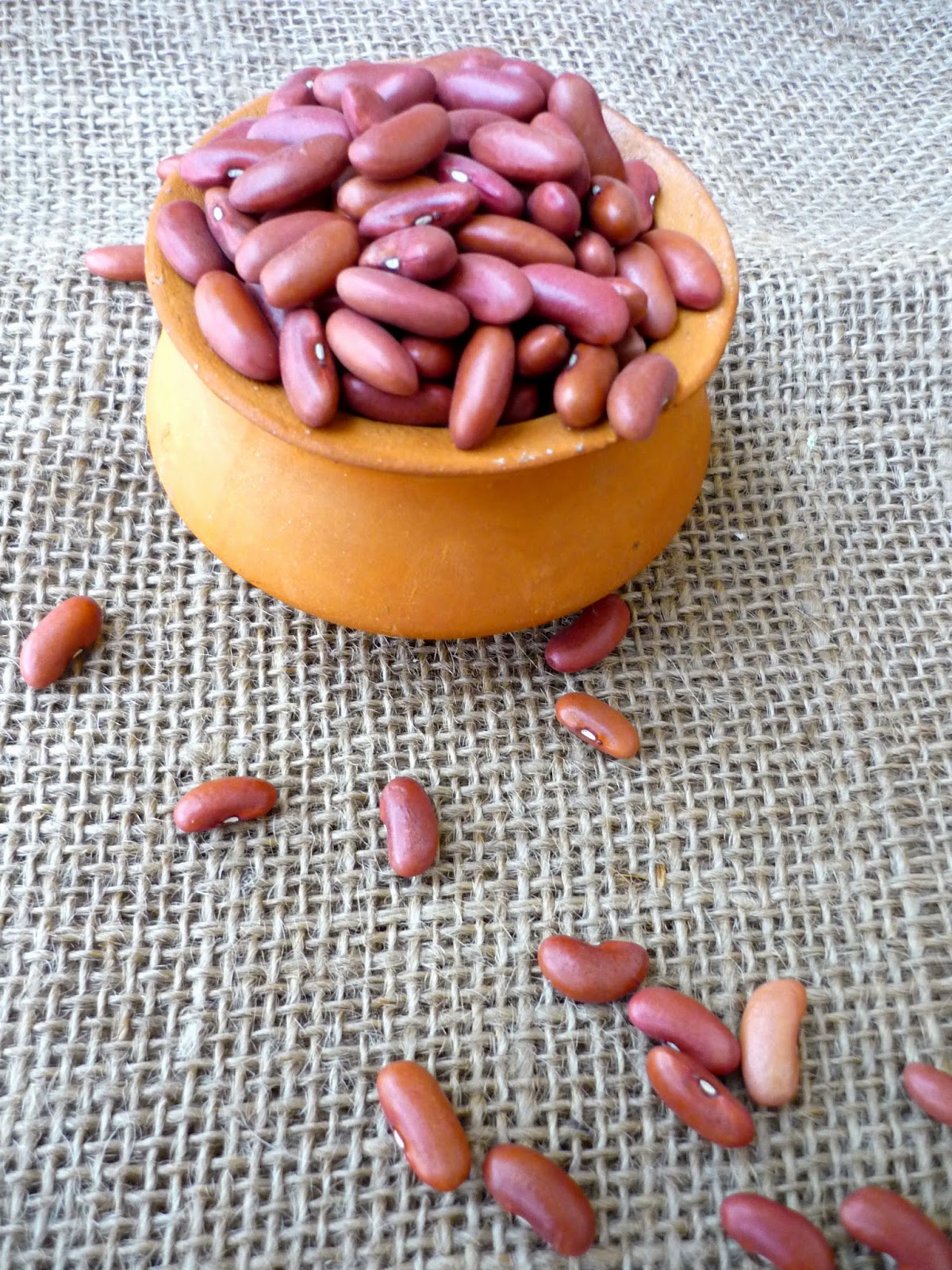 These dark red kidney shaped legumes are rich in potassium, magnesium , iron and protein , hence making it a great alternative to meat for vegetarians. Rajma is low on calories, high in protein and fiber, loaded with disease fighting antioxidants which promotes healthy and strong immunity.
Being high in fiber and protein it helps in maintain healthy blood sugar level, is rich in vitamin K and B making it good for the brain.. High fiber content (both soluble and insoluble) helps in cleansing the digestive track and improves bowel movement.Its high magnesium and fiber contents helps in reducing bad cholesterol and having a healthy cardiovascular system.

This legume is not only healthy but is rich in taste and flavor, a versatile ingredient indeed which can be used to make salads, soups, stews, cutlets and not to forget our very own “Rajma Chawal”. 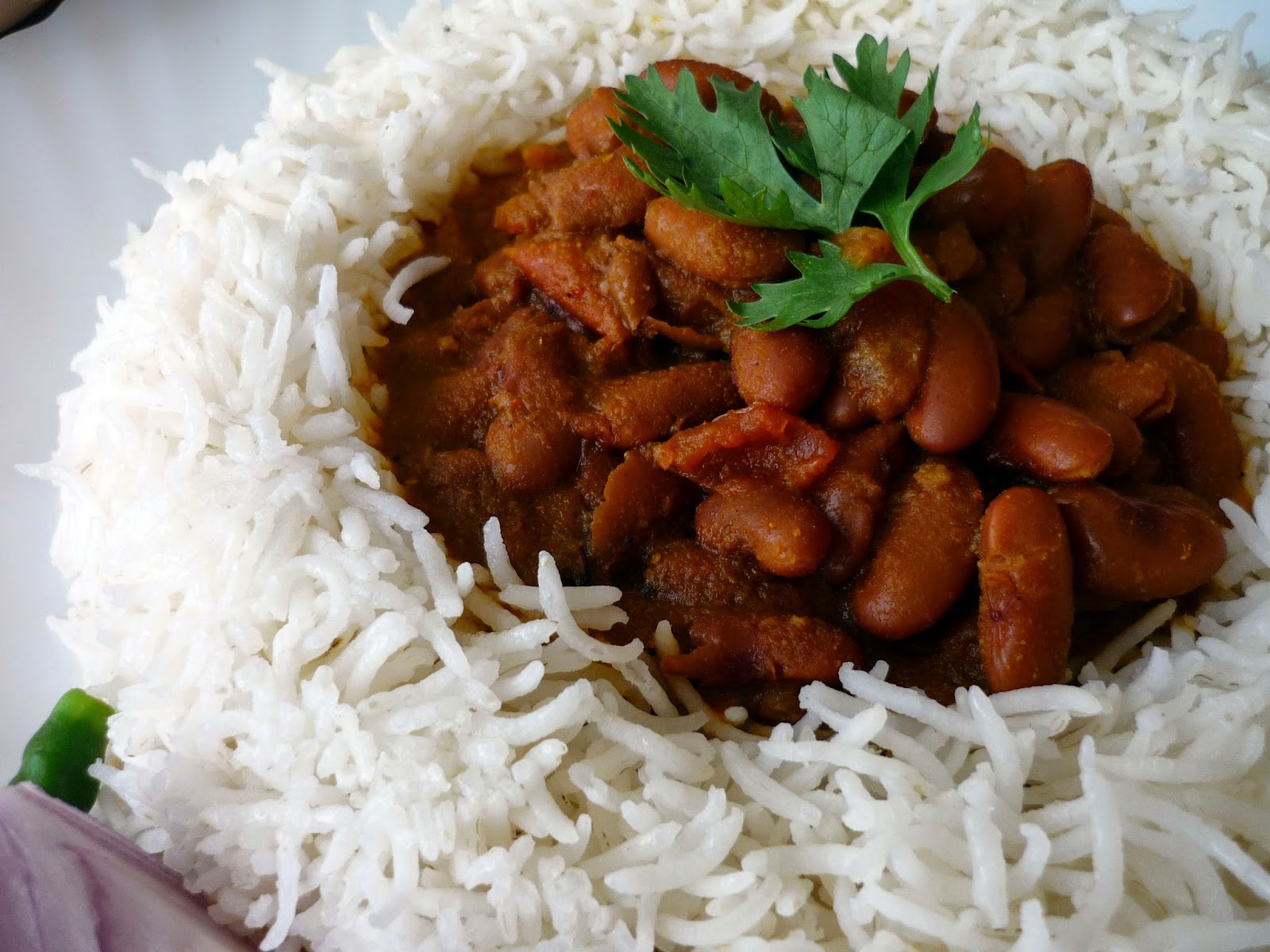 Rajma Masala is comfort food, you can have it with steamed rice, roti and never worry about leftovers as it even tastes better the next day. I usually make extra and keep the leftover in the fridge, warm it up well the next day in fact let the gravy thicken so it gets a more creamy texture and just enjoy it with toasted bread…..Oh! I’m drooling…Perfect for a lazy weekend meal and loved by all.

Clean and wash the Rajma and soak overnight or at least for 8-9 hours. 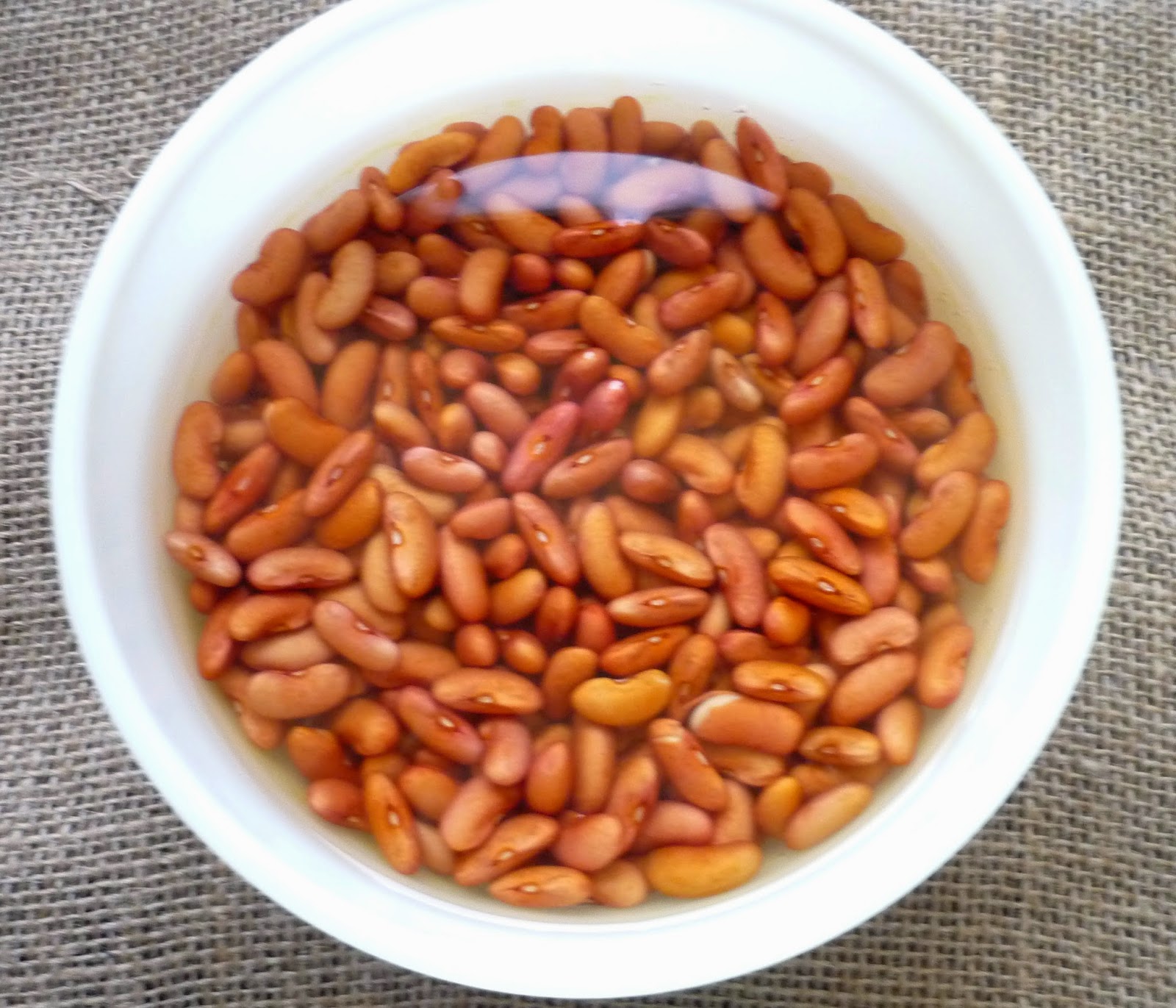 Rinse soaked rajma 2-3 times under running water. Pressure cook rajma along 4 cups of water, salt, bay leaf, 2 green cardamoms, 3 cloves and cinnamon stick. (I had cooked until 4 whistles, this may vary, depends on the variety of Rajma) 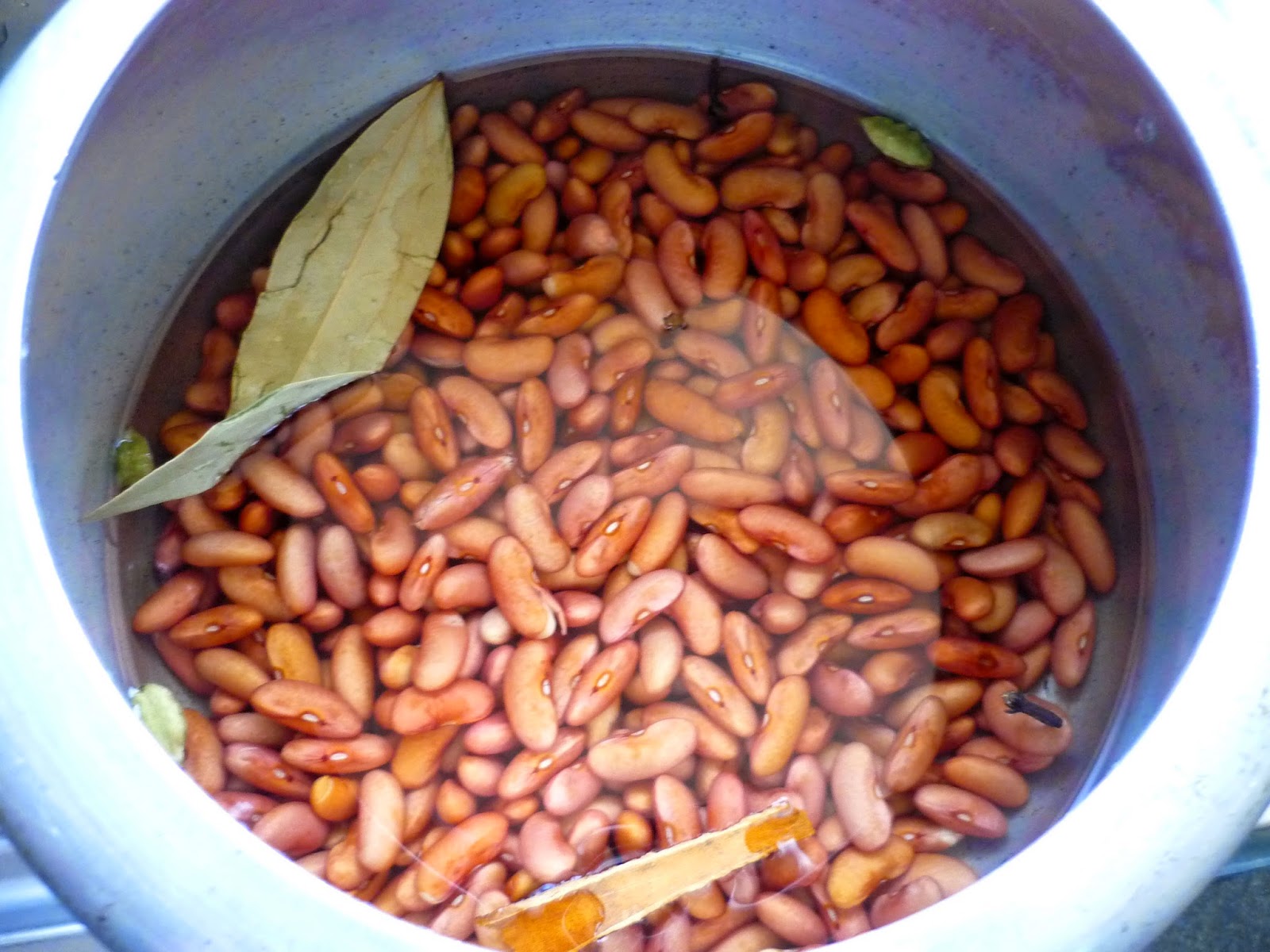 While the rajma is cooking, make a paste of one and half onions and garlic, to this paste add turmeric powder, red chilli powder, coriander powder and cumin powder, mix well and keep aside.
Finely chop half of the remaining onion and keep aside. 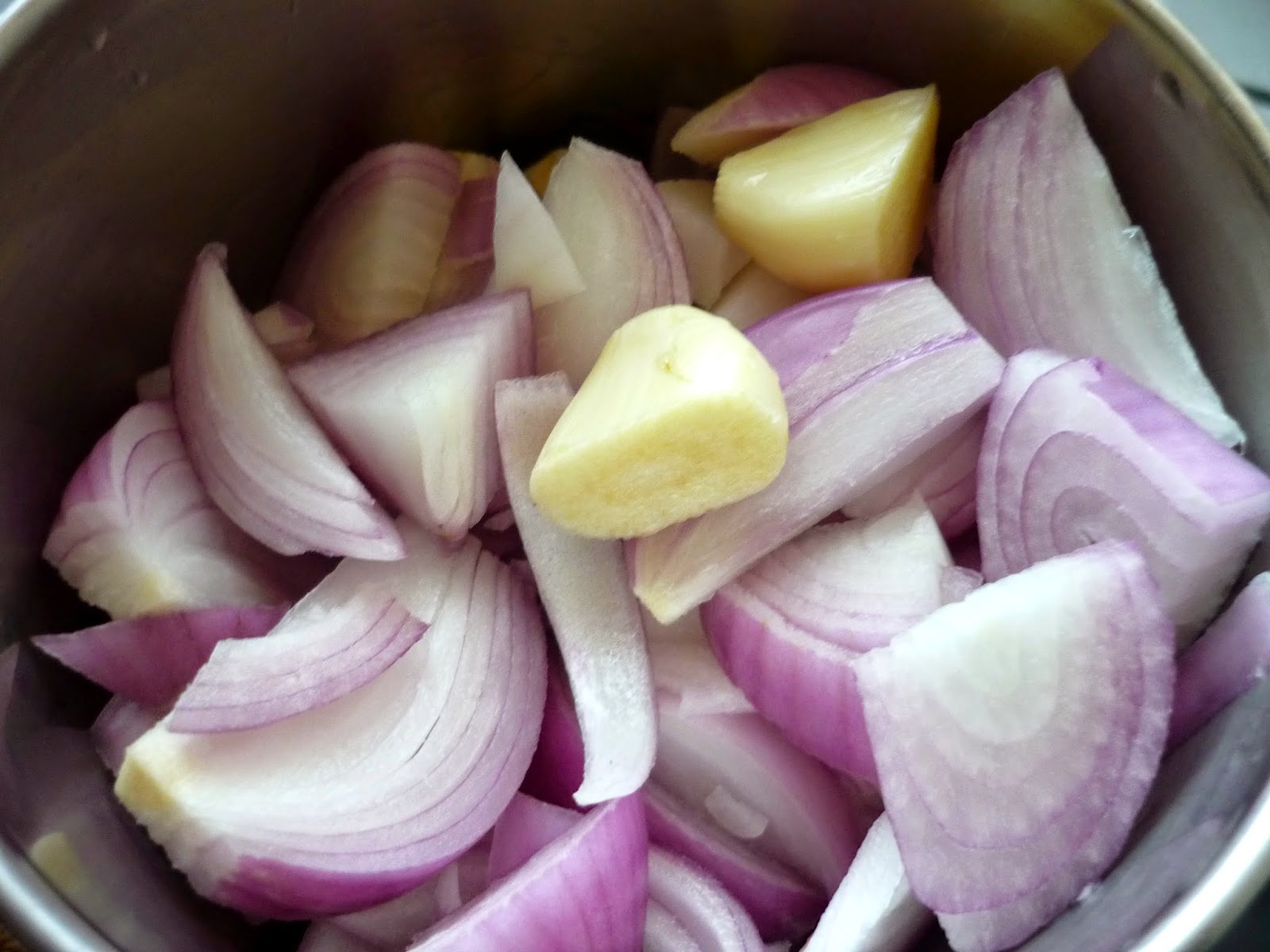 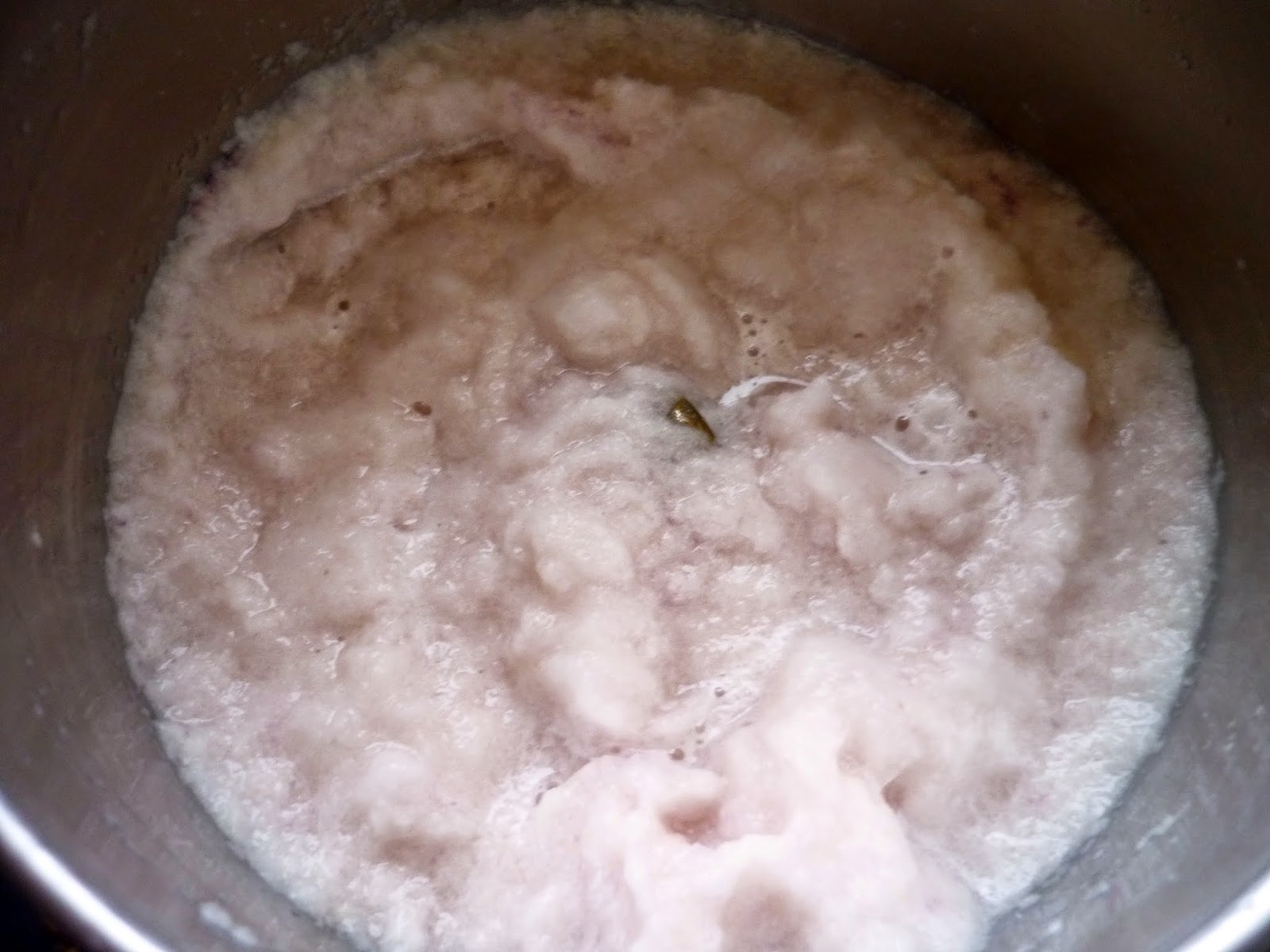 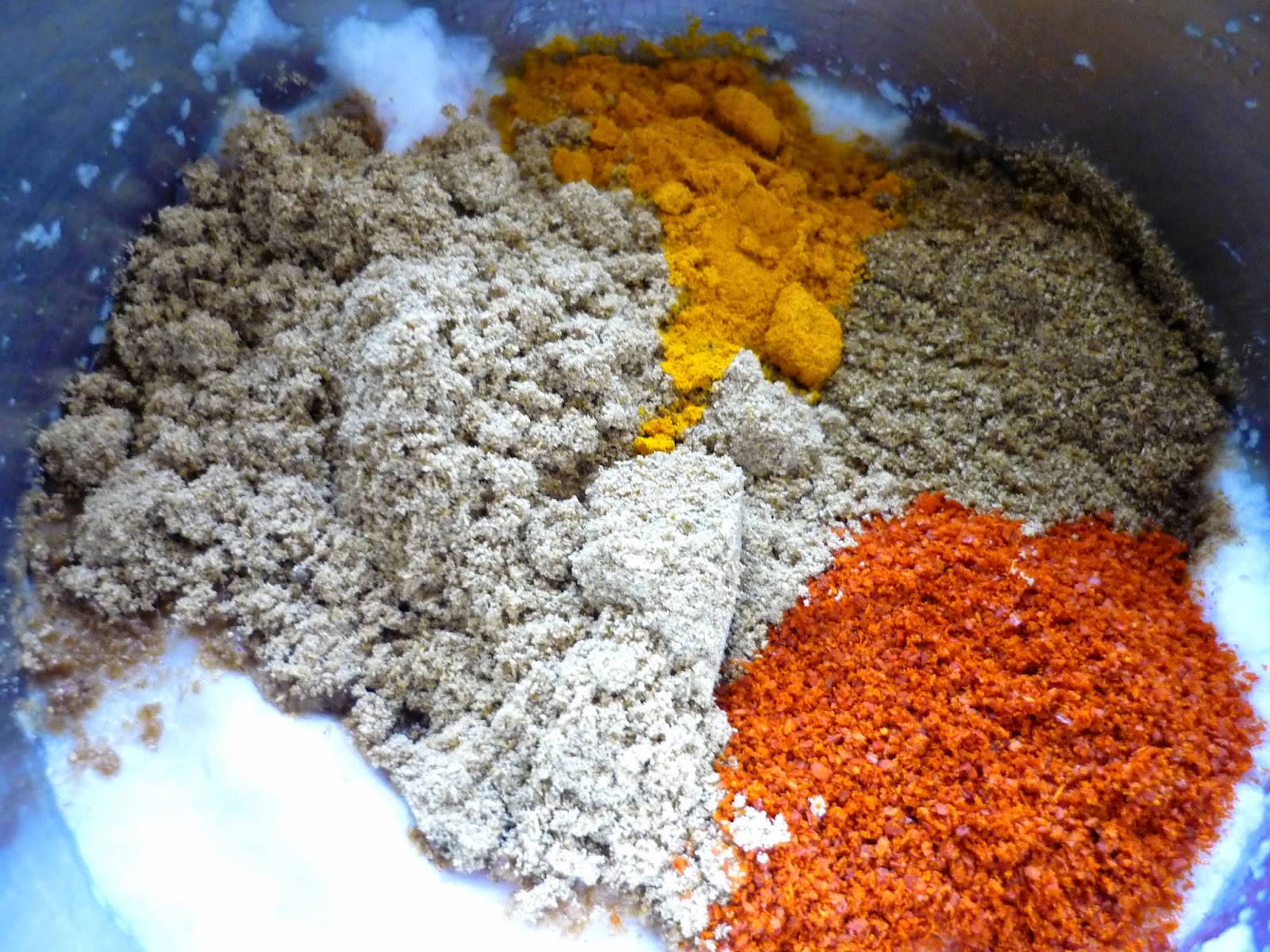 Once the rajma is cooked, turnoff the heat, let all the steam escape from the pressure cooker before you open. 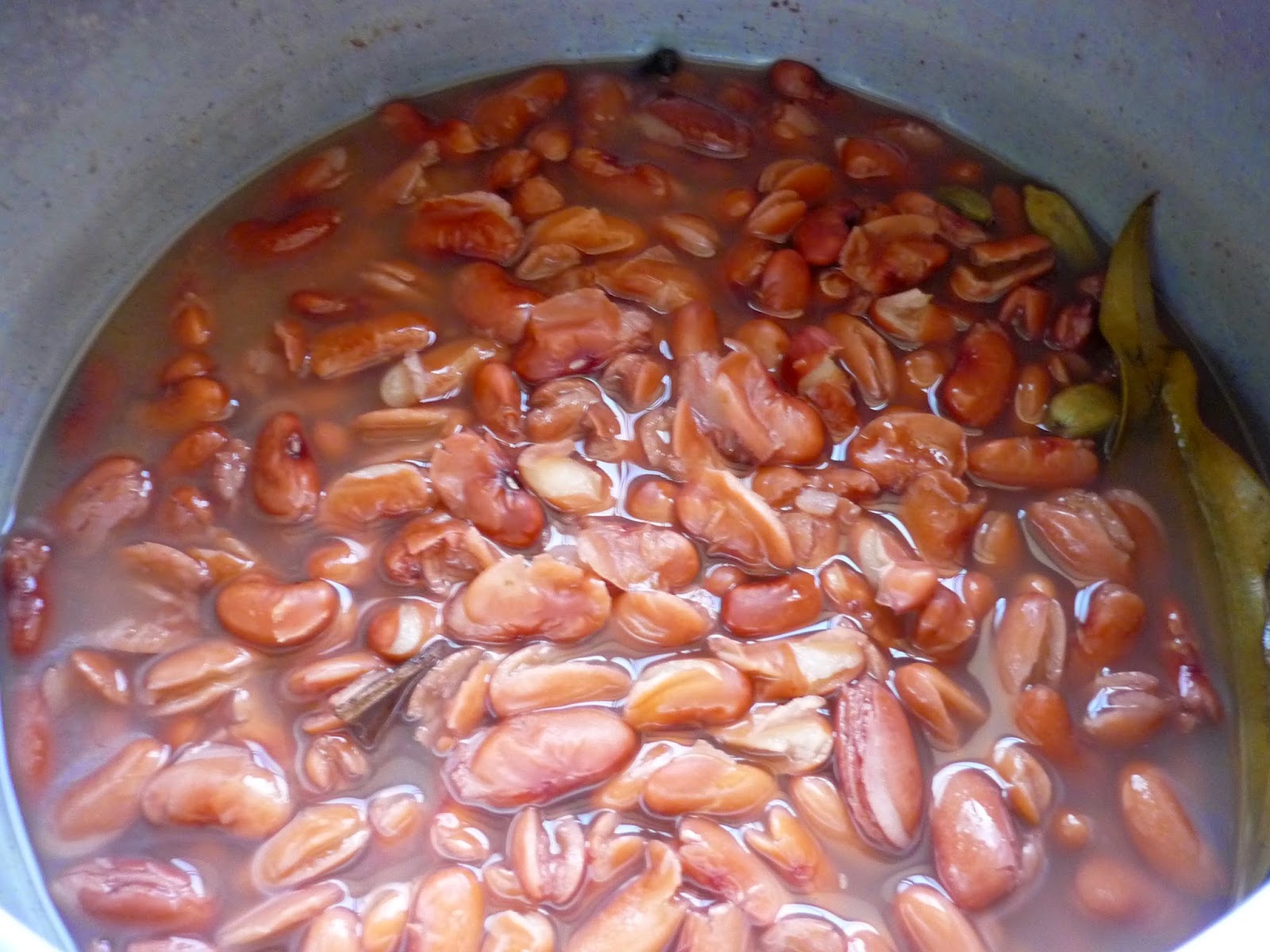 Heat oil in a kadhai, add the remaining green cardamom and cloves, once they start releasing the aroma add the finely chopped onion. Fry the onion for 2 minutes and when they start to change colour add the onion garlic and masala paste. Mix well and fry for 3-4 minutes, add grated ginger and chopped tomatoes and salt. Mix well and fry until the tomatoes turn mushy and oil starts appearing on the sides. 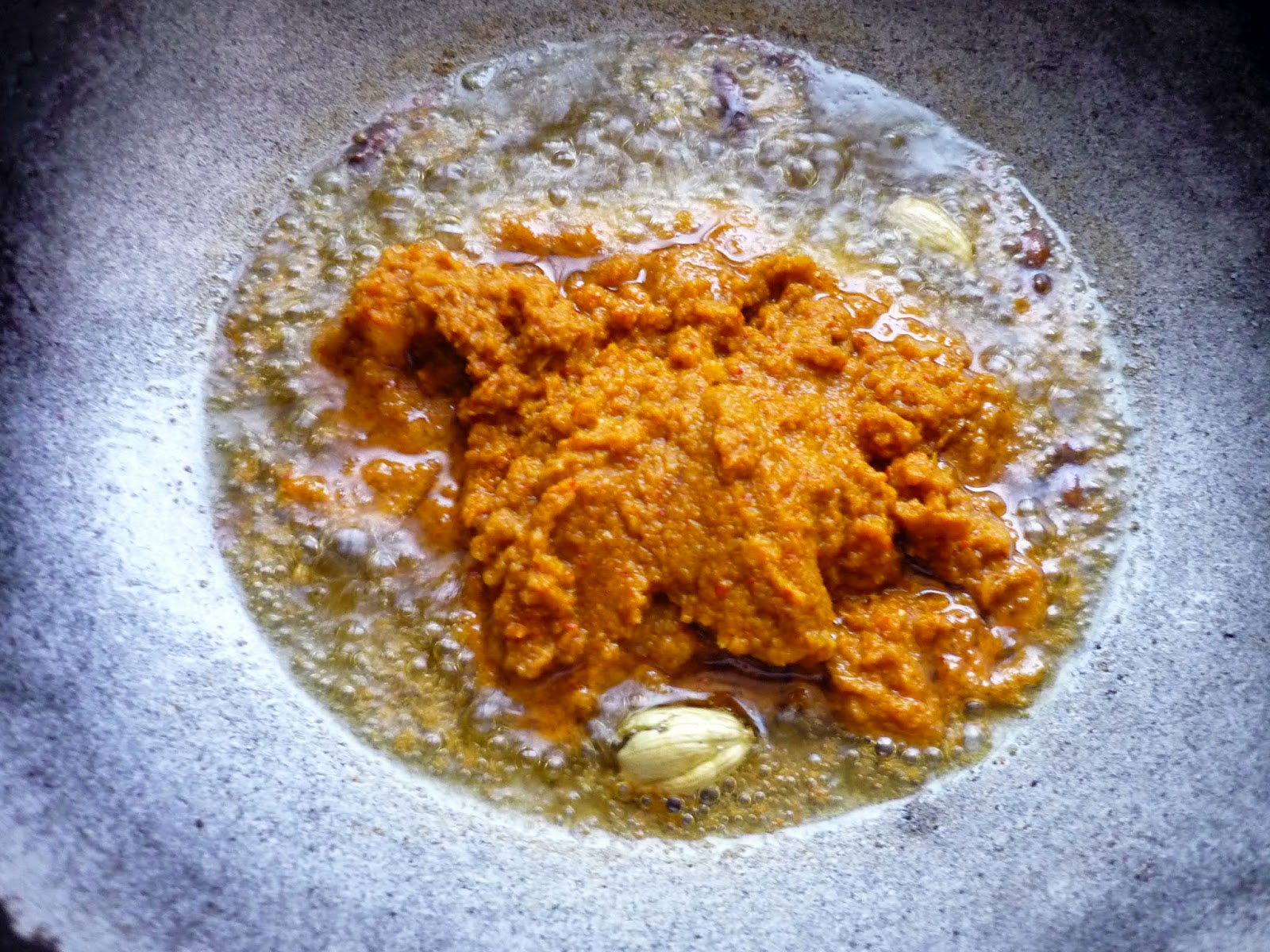 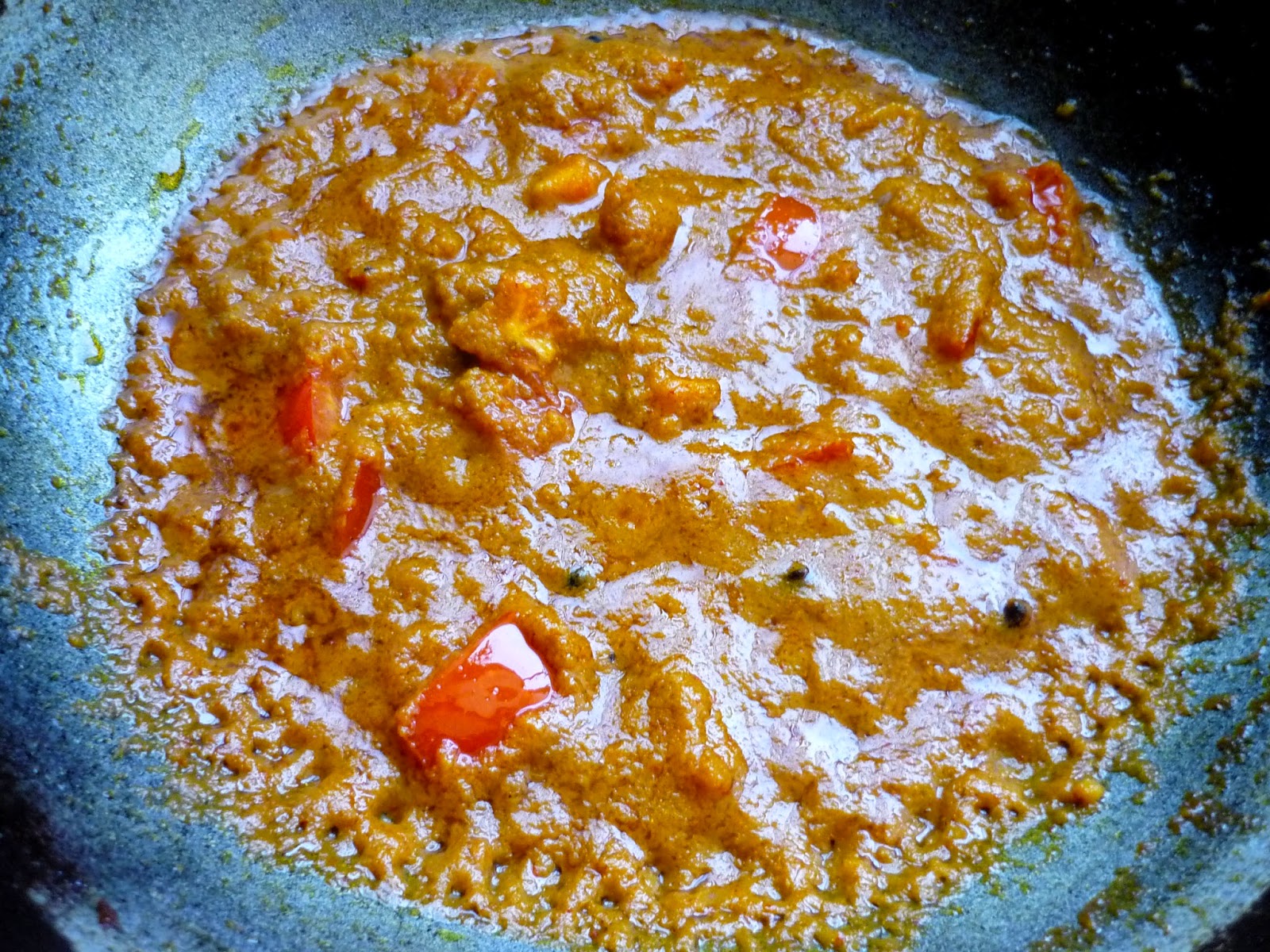 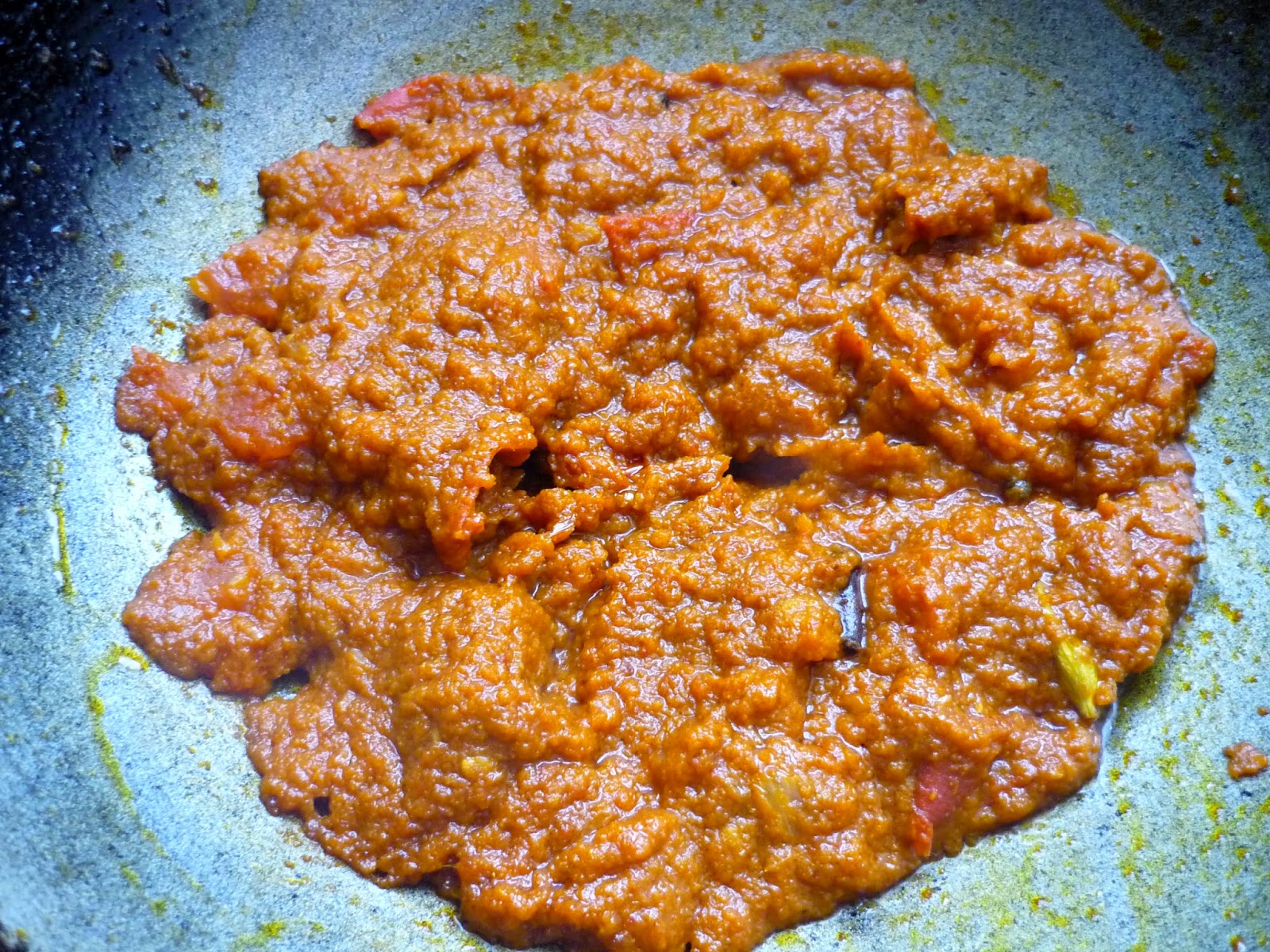 Add masala to the boiled rajma, mix well add garam masala powder and bring it to a boil, close the lid of the pressure cooker and cook unit one whistle. Turn off the flame and let all the steam escape before you open the pressure cooker. (You must be wondering why pressure cook again but this ensures that the flavors blend well with the rajma, also if the rajma was a bit under cooked initially it will be well done by now. ) 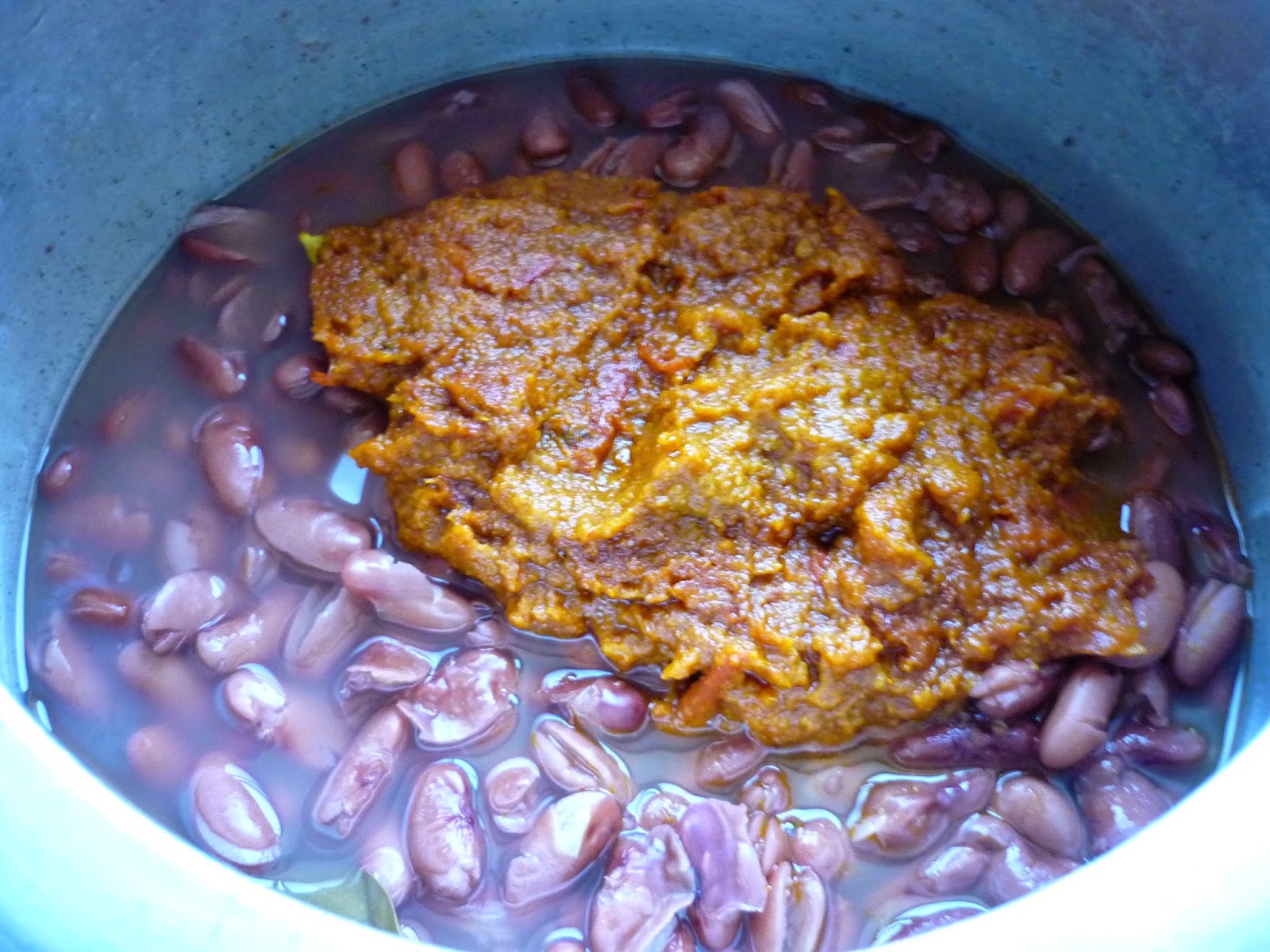 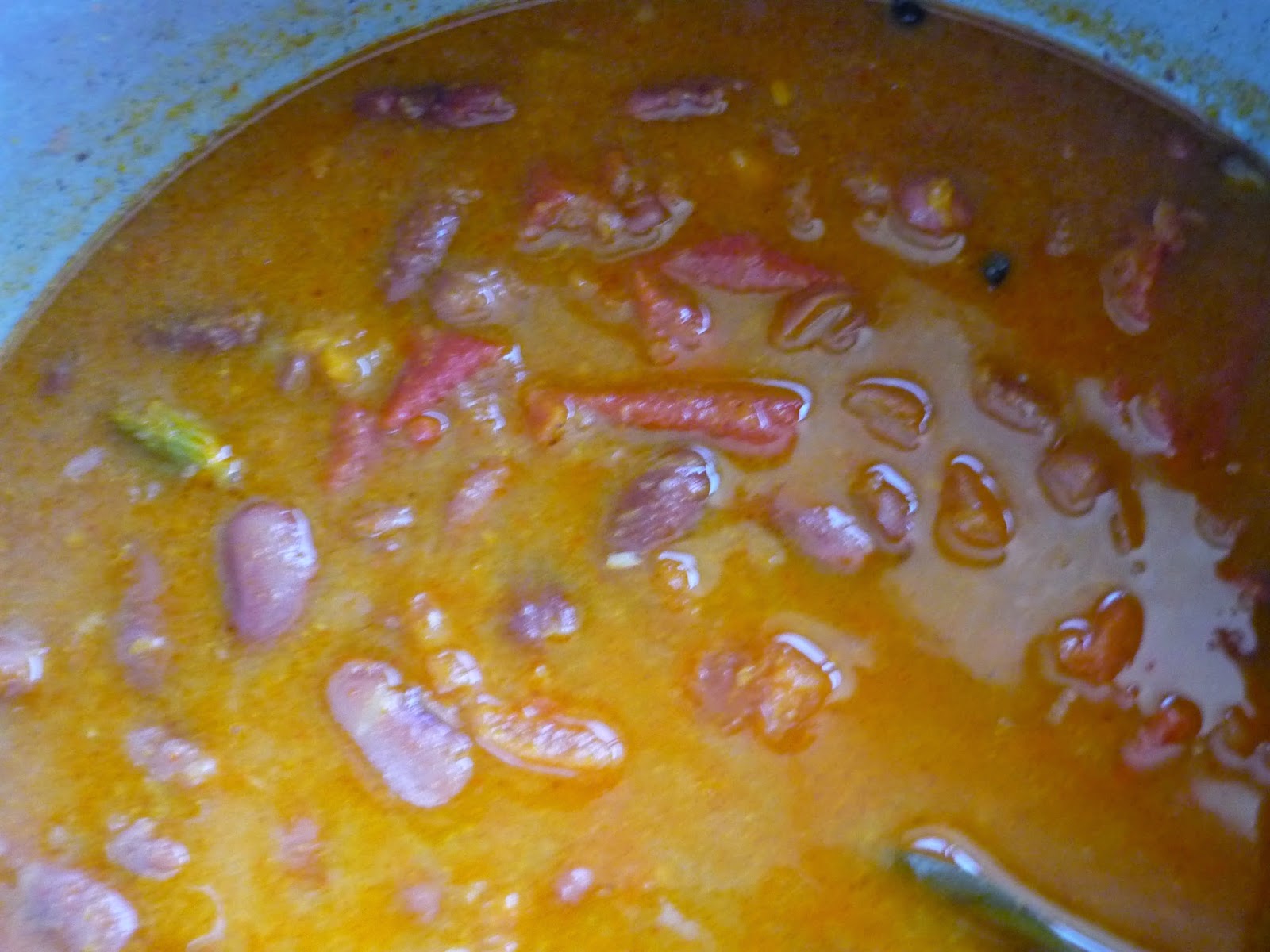 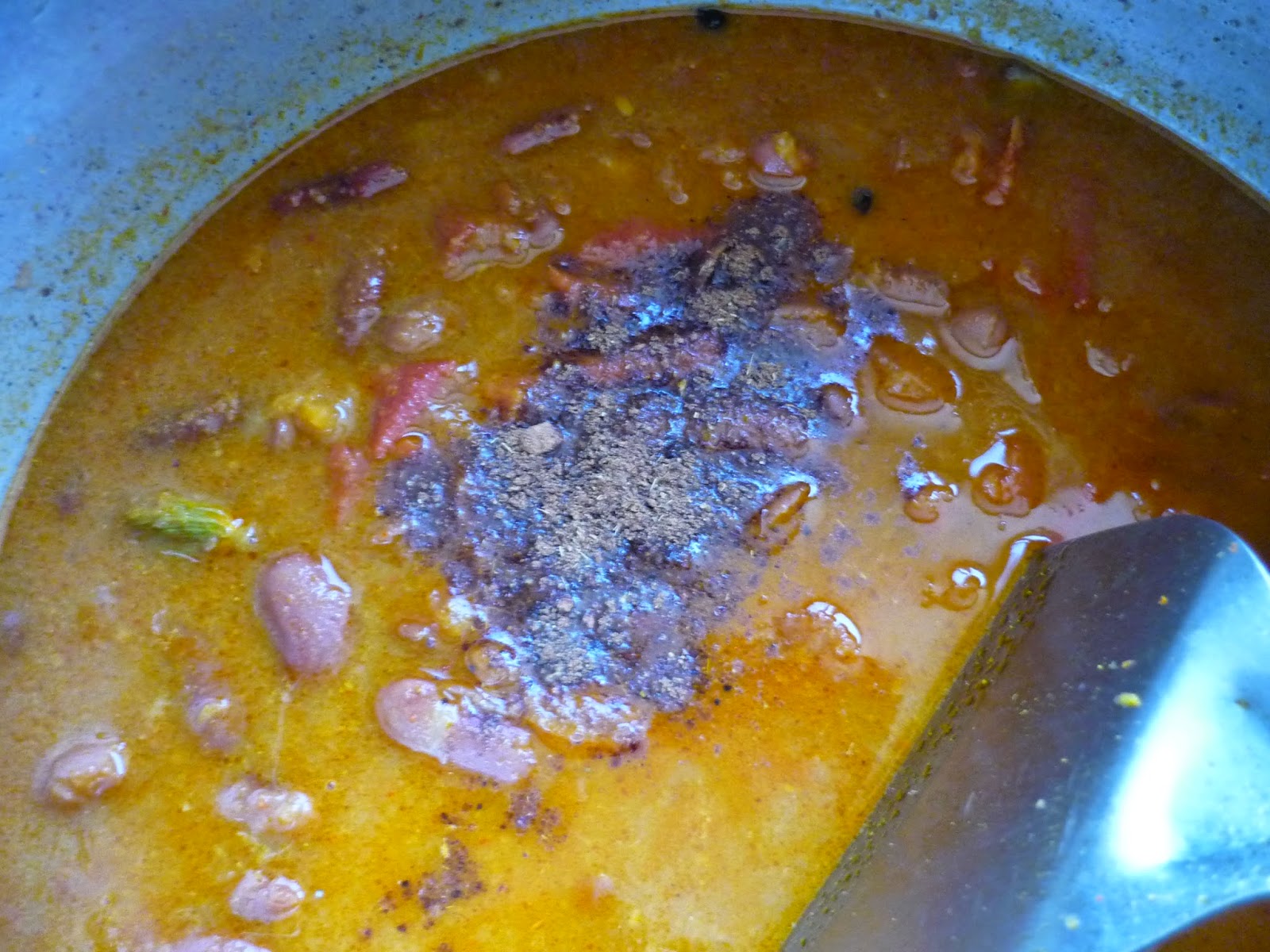 Garnish with freshly chopped coriander and serve hot along with steamed rice. Enjoy 🙂 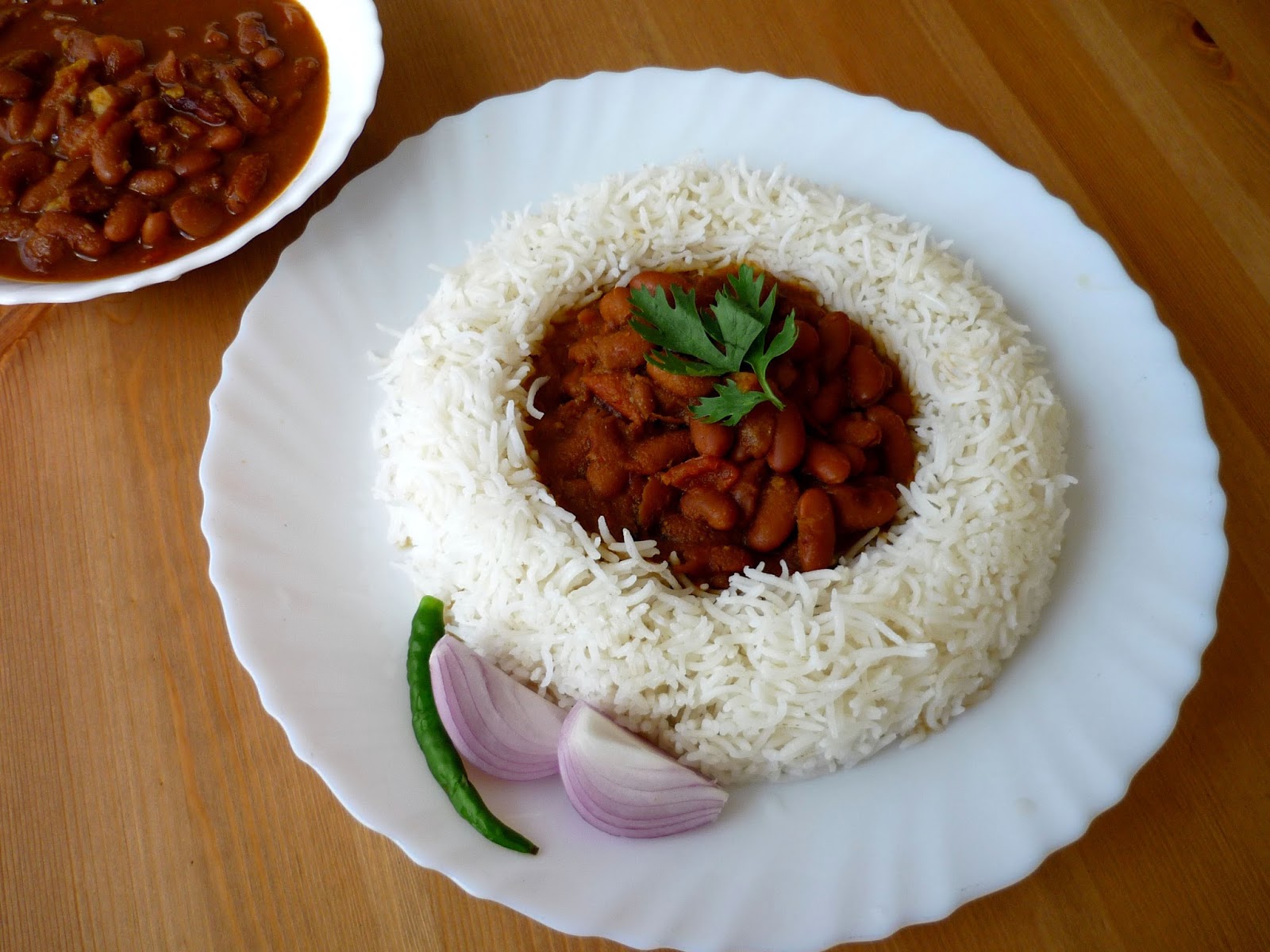 Notes:
The cooking time of rajma depends primarily on the variety, the ones which I used are not the really dark red ones and were cooked in 4 whistles, but the dark red ones usually take a bit more time may be around 6-7 whistles.
Do remember we have added salt while boiling the rajma, hence  go slow while adding salt while preparing the masala.
These days Pre boiled canned Rajma is easily available in most supermarkets, if you are using them then you can just prepare the Masala and add the cooked Rajma and pressure cook for one whistle. Doing so will ensure that the flavors of the masala is well blended with the Rajma.
Also note that the above mentioned masala ingredients in the recipe would be sufficient for 2 cans of 14 Oz or 400 gms (Net Wt.).